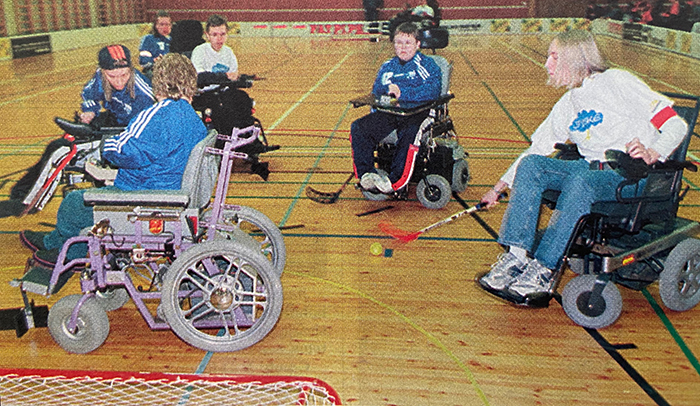 Already in the early 1970s a sport similar to Powerchair Hockey was played in the schools for children with special needs around the World – in Canada, Australia and Central Europe, particularly in the Netherlands and Germany. From this modest game played with plastic sticks and light plastic ball the modern Powerchair Hockey was developed. For a long time the sport was called Electric Wheelchair Hockey but in this article it is referred by its modern name Powerchair Hockey.

In Finland the pupils in special schools started to play floorball with manual and electric wheelchairs in the 1980s but it was not until early 1990s when the actual Powerchair Hockey was introduced in Finland.

In 1993 Timo Rautanen travelled to the Netherlands to join the international camp for persons with neuromuscular disorder. There he got the first taste of ”sähikkäsähly” as he referred the sport in Finnish. Back home Rautanen started to organise training sessions for the members of the local neuromuscular disorder organisation in Helsinki.

– At the beginning we had training sessions in various places, even outside and in an abandoned warehouse in Malmi, says Miro Reijonen who has been a visible actor in the Finnish Powerchair Hockey since 1994.

The first Finnish team – Helsingin Räiske – was invented in 1994. Enthusiastic pioneers also arranged test events in various Finnish cities. There was one event in Tampere where some public Finnish figures such as TV meteorologist Juha Föhr and musician Olli Lindholm got to try out the new sport in November 1993.

The first Finnish Powerchair Hockey tournaments were played in the mid-90s with three to four teams taking part.

The official Finnish National League started in 1997–98 with five teams: Räiske and SSV from Helsinki, Hot Rods from Oulu, Jyske from Vaasa and the Eastern Finland combination called Team Karelia. Jyske from Vaasa was crowned as the first ever Finnish champion with Miika Riikonen scoring a bunch of important goals on the way. From the very beginning the National League has been organised by the Finnish Floorball Federation (Suomen Salibandyliitto).

Miro Reijonen played a big role in building the international relations and organising the first Finnish national team. Reijonen was fluent in German language and he also had excellent digital skills in the time when the World Wide Web opened for public in 1993. Reijonen for example translated the Powerchair Hockey rules from German to Finnish in 1995.

– The Finnish name for the sport, ”sähköpyörätuolisalibandy”, came from me as I first wrote that monster of a word in the cover of the first Finnish rule book for Powerchair Hockey. Before that we didn’t use the word salibandy (floorball in English) when talking about the sport, Reijonen says. 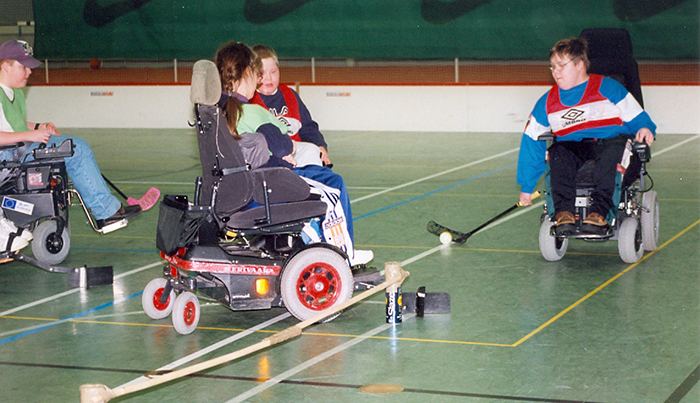 Thanks to Reijonen’s contacts the first Finnish team, Helsingin Räiske, got a chance to take part in the international tournament played in Neubrandenburg, Germany in April 1995. Räiske finished 14th in the tournament with 16 teams, mostly from Germany and the Netherlands but also from Denmark.

The first Powerchair Hockey World Games was organised in Utrecht, Netherlands in May 1998 with ten national teams taking part – nine European teams and Canada as a long journey guest. Finland finished fourth after the Netherlands, Germany and Turkey – a team that consisted of Turkish immigrants living in the Netherlands and Germany.

It all looked bright for the rise of the international Powerchair Hockey movement after successful World Games in the Netherlands. The next World Games was supposed to be organised in Germany already in 1999 and the plans to invent the official international Powerchair Hockey association were on the way. But then the things went all silent for a while.

– My new job and the other important things in life took most of my time, Miro Reijonen explains why he couldn’t play a part in developing the international aspect of the sport for few years both sides of the Millennium.

The international association was eventually founded in April 2002 in a meeting in the Netherlands. The first presidents of the newly found International Committee for Wheelchair Hockey (ICEWH) were Sander Hilberink from the Netherlands and Miro Reijonen from Finland.

– Already when we were still in the Netherlands we started to plan with Pyry (Finnish player Pyry-Matti Niemelä) where in Helsinki we could arrange the first ever Powerchair Hockey World Championships, Reijonen remembers.

Finland did get the first World Championships. The tournament was arranged in the Ruskeasuo Arena Center, Helsinki in June 2004. The teams were staying in the nearby Ruskeasuo special school. The Netherlands was crowned World Champions before runner-up Germany. The hosts finished fifth.

One of the specialities in the Helsinki World Championships was that Australia managed to beat Finland. Throughout the history of the Powerchair Hockey the sport has been dominated by the European countries and Australia’s 4th place in Helsinki is by far the best achievement from a non-European team to date. 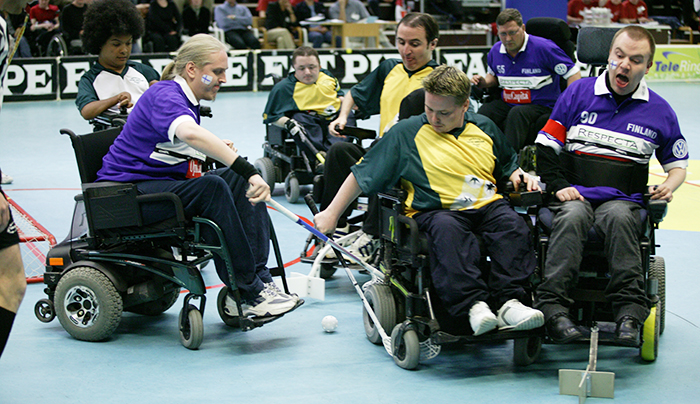 There have been efforts, though, to spread the sport outside Europe. In August 2001 the World Cup tournament was arranged in Minneapolis, USA, with 11 teams from six different countries. The Finnish national team claimed third place after a semi-final defeat to Calgary Selects and a bronze match victory over Minnesota Stars.

There still is a sport called Power Hockey played in the United States with slightly different rules compared to the European version but there haven’t been tournaments similar to the Minneapolis World Cup since. Canada took part in the 2018 World Championships and finished seventh after some heavy defeats including a 0–33 thrashing against the Netherlands.

Although there are many similarities in the Powerchair Hockey and floorball, the top European teams in those sports are quite not the same. Finland and Switzerland are strong in both sports but Sweden – a top floorball country – doesn’t even have a Powerchair Hockey national team. They have a very similar sport called El-hockey.

El-Hockey is also played in Denmark but that hasn’t prevented them to become one of the top countries in Powerchair Hockey. The ”founding fathers” Germany and the Netherlands are still in charge of Powerchair Hockey but Italy has also risen to the top. Belgium has also played twice in the championship final match.

When there were two teams outside Europe – Canada and Australia – willing to take part in the 2018 World Championships, it meant that there were only six places left for European teams and Finland was out of the tournament for the first time.

The Finnish Neuromuscular Disorders Association had an important role spreading the word and arranging test events in the early days of the Finnish Powerchair Hockey but now the role has diminished a bit. Most of the Powerchair Hockey players have a neuromuscular disorder but the sport is suitable for a large range of persons with disabilities. The Finnish National League and the second-tier league called Finlandia-sarja are open for all persons who use some assistance equipment for coping with daily actions.

The Finnish National Powerchair Hockey League has been played continuously since 1997–98. The second tier, Finlandia-sarja, started 2008–09.