Kasper Vuorinen have perfected his skills playing in the yard 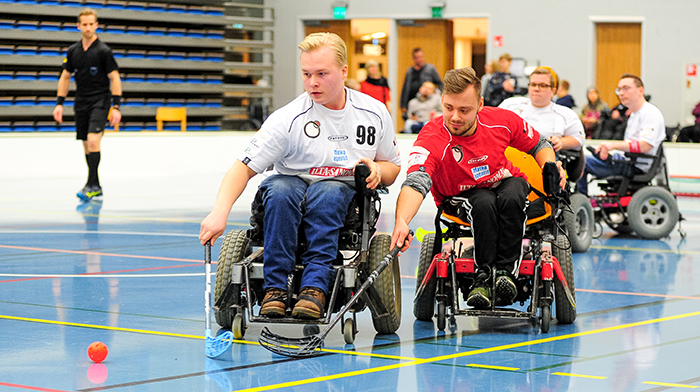 Kasper Vuorinen collects the ball inside Finland's own half and cruises past the half way line. Then he turnas towards the center and starts driving round the Italy defenders. A little sprint and then a quick and powerful shot to the near corner of the goal.

With this strike Vuorinen levelled the score for 5-5 in the final of the IPCH Euro Stars tournament against the hosts Italy on February 2020. Finland eventually had to settle for a 5-6 defeat but a 17-year-old Finn had already made his mark. Vuorinen was the player who controlled the ball against a very good Italy team in the dying minutes of the final match.

Before the pandemic put the season 2019–2020 to a halt Vuorinen had scored 35 goals in eight Finnish national league matches. It seems that the young ace can’t stop putting the ball to the net.

– I have been playing floorball in our yard since I was a small kid and it have for sure benefited my shooting and stick handling, says Vuorinen who started to play Powerchair hockey when he was about ten years old.

Vuorinen uses a manual wheelchair in his everyday life and has a classification of 4.0 points in Powerchair hockey. It means his hand and upper body functions are pretty good.

In Powerchair hockey the goal is 250 cm wide but only 20 cm high so it’s no use for a player to aim for the upper corners – a thing that seems so tempting in other sports such as football or ice hockey.

– My favourite strike is one that goes to the goal below the keeper’s wheelchair, tells Vuorinen.

He likes to wait for the exact moment when to release the shot so it most likely ends up going in. If there are too many wheelchairs and sticks between him and the goal Vuorinen prefers to pass the ball to a team mate instead. It is a combination of instinct and being able to read the game.

– Maybe my weakness still is that sometimes I rush my shots, but I’m getting better every day.

Vuorinen says he likes to score both straight from the pass and after a dribble.

– Maybe there are slightly less goals straight from the pass but it depends a lot of how your team is playing.