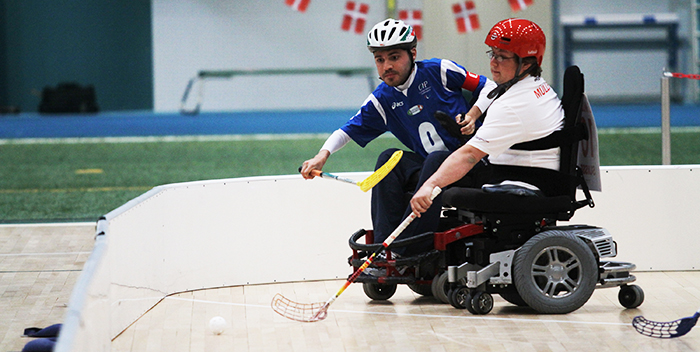 Powerchair Hockey is a team sport for people with a physical disability who need a powerchair to practice sport. Basically it's floorball played with powerchairs.

Two teams of five players (one goaltender, four field players) compete against each other. An international match of Powerchair Hockey is played in two halves of 20 minutes actual playing time, with a half time break of 10 minutes.

There are two kinds of players. Players who have enough strength to hold a stick in their hand, play with a short floorball stick. Others play with a stick that is attached to the wheelchair, a T-stick. Each team needs to have at least two T-stick players: one goaltender in front of the goal and one player on the field.

Players drive with a maximum speed of 15km/h on an indoor playing field of 26m long and 16m wide, that is enclosed by plastic boundaries with a height of 20cm. The goal is 2,5m wide, 20cm high and 40cm deep.